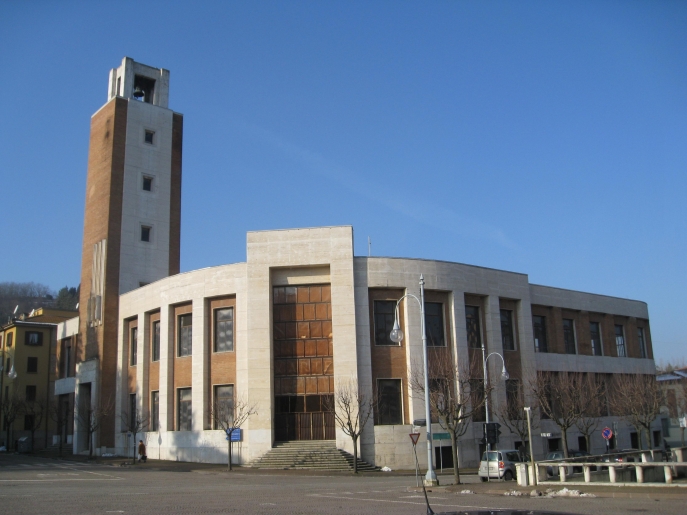 The « Casa del fascio » in Predappio, former headquarters of the National Fascist Party

Predappio, a commune of 6,500 inhabitants in the Emilia-Romagna region of Italy, is the birthplace of Mussolini and the site of his family mausoleum, located in the cemetery of San Cassiano and decorated with a famous bust of Il Duce. The plaque situated at the entry of the crypt reads:

“I would be naïve to ask to be left in peace after death. There can be no peace around the tombs of the leaders of those major transformations we call revolutions. But everything that has been done cannot be effaced. While my spirit, now free from the material world, will live, after the brief terrestrial life, the eternal and universal life of God, my only wish is to be buried next to my parents, in the cemetery of San Cassiano.

Mussolini and his mistress Claretta Petacci were arrested by a group of partisans in the village of Giulino di Mezzegra on Lake Como as they tried to flee. They were executed on April 28, 1945. The following day, their bodies were displayed in Milan’s Piazzale Loreto, where fifteen partisans had been shot the previous year as a reprisal for an attack on the Germans. The body of the Duce was buried in a mass grave in the cemetery of Musocco, near Milan. During the night of April 22, 1946, it was stolen by nostalgic fascists and interred in the cellar of the convent of Sant’Angelo, giving rise to contradictory rumours. Some claimed that Mussolini was still alive, others that they knew the location of his last resting place. Once the abductors had been arrested and the remains recovered, the authorities of the Italian Republic decided, in the greatest secrecy, to entrust the remains of the corpse to the Capuchin convent of Cerro Maggiore, where it was stored in a closet for eleven years. On August 31, 1957, they authorized the inhumation of the remains in the cemetery of San Cassiano.

Since then, around 50,000 people a year travel to Predappio to pay homage to the founder of fascism, especially on anniversaries such as that of his birth (July 29, 1883), his death (April 28, 1945), or of the March on Rome (October 28, 1922). This “pilgrimage” has encouraged the commercialization of a veritable paraphernalia of objects, souvenirs, and symbols of fascism: truncheons, bottles of castor oil, fasces, eagles, Celtic crosses, as well as t-shirts printed with the slogan “I love Duce,” mugs and glasses, cigarette lighters, keyrings, calendars, and even bottles of wine commemorating Mussolini (“Nero di Predappio, Eia Eja Alala,” “Vino del camerata,” “L’Italia agli Italiani,” etc.). The town hall, administered by the Left since 1945, struggles to deal with these “tourists,” whose presence nevertheless enriches the local economy. In 1984, it decided to authorize the creation of three souvenir shops in an attempt to stamp out illegal street sellers. Recently, Mayor Giorgio Frassinetti, a member of the Democratic Party, has proposed setting up a museum of Fascism, to be opened in 2019. This museum would be installed within the former headquarters of the National Fascist Party (the casa del fascio), a building of 2,400 m² overlooked by a 40-metre tower that has stood derelict for two decades. Drawing inspiration from the documentation centre on Nazism that opened in 2015 in Munich, the mayor aims to transform propaganda tourism into a tourism of knowledge: “The culture of historical research seems to be the only way to prevent Predappio being reduced to the image of a symbolic place of fascism”. In 2016, Matteo Renzi’s government expressed its interest in the project and promised to provide some of the funds.

This project has provoked a number of very different standpoints, even polemics, concerning the possibility of a shared memory of fascism, the opportunity to create such a museum, and the museological and historiographical criteria it would imply. Future Pasts has invited two Italian historians – Marcello Flores and Giulia Albanese – as well as an Argentinian historian – Fernando Devoto – to discuss this subject.