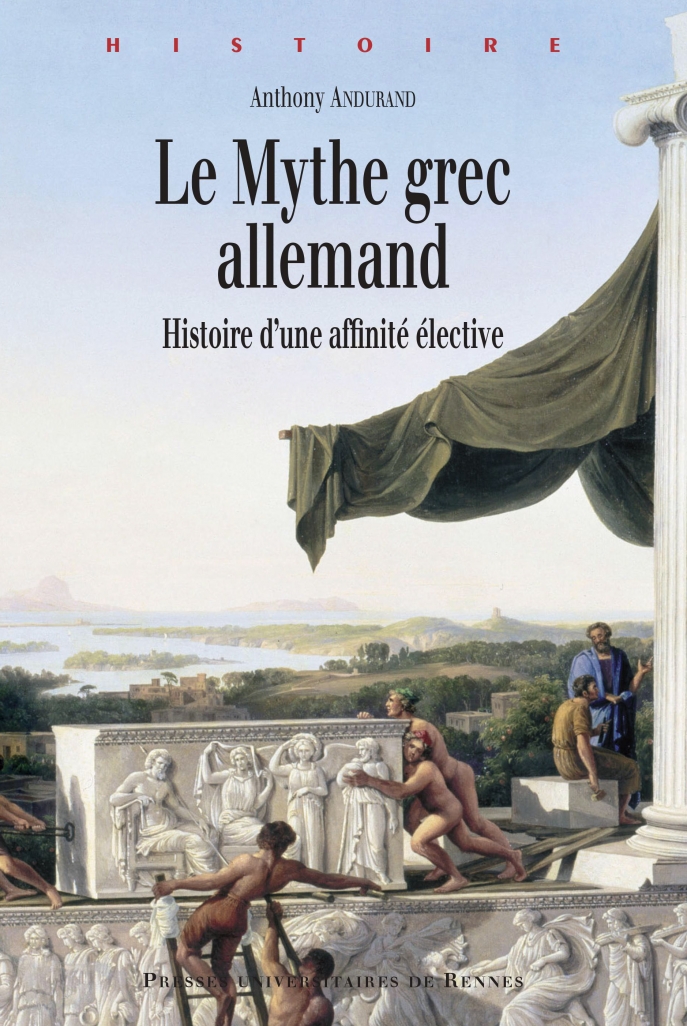 Anthony Andurand’s study of what he calls, with reference to works by Walter Rehm and Eliza M. Butler from the 1930s, the “Greek myth” of German culture seeks to provide a synthetic account of the odd, evidently one-sided “special relationship” or “elective affinity” “Germans” “believed” to enjoy with regard to “Ancient Greece.” The phenomenon is also known as “Greacophilia” or “philhellenism” and has often been labeled as a form of “enthusiasm.” You see, this is a terrain on which one cannot move without quotation marks. The author deviates from some other works in the field by focusing on what he calls “la science allemande.” Only occasionally does he touch upon the literary field, and he leaves aside the other arts, even though he does not challenge the common periodization according to which the phenomenon at hand started with Winckelmann.

As the study proceeds into the nineteenth century, the “science” at stake, which at first is a broader pursuit that comprises philology, historiography, philosophy, theology, and a few others, becomes, increasingly, the novel discipline of Altertumswissenschaft, the “science of antiquity.” The study makes few selective forays into philosophy (Nietzsche) and bestows some attention on archaeology (Curtius). The core of the “science” in question, however, is historical writing. The author also stresses, vis-à-vis other works, the “mythical” quality of Graecophilia, although he uses the concept of myth mainly to provide a counter-balance to the “logos” of science, in order to insist on the figurative portion that inhabits historical discourse. With Paul Veyne, he stresses that the question of “belief” in myth is thorny, that it requires greater subtlety regarding the actual meaning of “belief.” The fact that German Altertumswissenschaft, especially the study of Ancient Greece, acquired, over the course of the nineteenth century, an unparalleled international dominance while at the same time many of its practitioners “believed” in an altogether bizarre “affinity” of their own “cultural nation” to Greek antiquity remains, quite certainly, befuddling.

The uses of Ancient Greece were diverse. Over the course of seven chapters in three parts, Andurand acquaints his readership with the trajectory of the early “Greek myth” from Winckelmann to Humboldt and Niebuhr, over the course of which, with the kind help of the Napoleonic Wars, Ancient Greek history was, so the argument, invented as a foil for German national history (ch. 1). Then follow chapters on the rise of Ancient Greek in “neo-humanist” educational reform after 1800 and the novel ideology of Bildung (ch. 2) and the formation of Graecocentric Altertumswissenschaft (Wolf, Boeckh, ch. 3). The second part, devoted to the bulk of the nineteenth century, covers, in only two chapters, the fortunes of the “Greek myth,” especially in historiography, across the difficult process of national unification (with special attention on Droysen and Ernst Curtius, ch. 4); and the reinvention of “pessimistic” Greece at the hands of scientific “realism,” which comprises, for the author, the works of the Swiss (!) historian Jacob Burckhardt and the philologist-turned-philosopher Nietzsche (ch. 5). The third part adds further perspectives on the adaptations of the Greek myth during the Wilhelmine period (ch. 6), with Ulrich von Wilamowitz-Moellendorff and Eduard Meyer as prime witnesses of a more militaristic, imperialist-expansionist and racist version of Greacophilia that culminated during the First World War. The concluding chapter (ch. 7) is then devoted to the neo-neo-humanist project of national education that Wilamowitz’s son-in-law Werner Jaeger developed in the 1920s, and the further uses of the Greek myth in the Nazi period, with special attention on Hitler’s relation to philhellenist classicism.

The volume is neither merely a history of a scientific discipline, nor is it a truly comprehensive work of synthesis. It is premised, if not very explicitly, on the centrality of historical writing in the overall complex of the “Greek myth”. For Andurand, the core of the myth in question is a broad field of plotlines that circulate between contemporary German political history and German accounts of Greek history. I appreciate the rigor of this overall argumentative strategy, yet maintain certain doubts about the choices it dictates.

To begin with, the eighteenth-century German passage into exclusive Graeco-classicism was less prompted by reaction to political history – in this case the French Revolution and its Roman classicism – than the book lets on. Detailed work in literary studies has shown many facets of the nature of this passage that Andurand’s historiographical focus leaves out. I would for instance point to the small, but important study the late Wilfried Barner devoted, as long as ago as 1973, to Lessing’s early tragedies, which followed, as was the hallmark of early modern classicism across Europe, the model of Seneca. Over the course of merely a few years, from the 1750s into the 60s, however, Lessing shifted his understanding of tragedy to one that exclusively referred to Ancient Greek models. Yet, in practice he retained important traits of his earlier Senecan imitations. The case demonstrates the vicissitudes of the literary reception of antiquity. Historical writing around 1800, in my view, has to be regarded as being ineluctably bound up with the literary field. In this field, tragedy had become crucial, in dialogue with Western and Southern European classicism, as has been demonstrated e.g. by Walter Benjamin or Peter Szondi, and these and other theoreticians of literature, e.g. Philippe Lacoue-Labarthe, have shown with great clarity the centrality of the tragic to the understanding of the historical-political in modern Europe significantly before 1789. It thus seems problematic to assume that it was mainly the productivity of political events that generated the phenomenon in question. And in general, in German classicism, it was not the case that Roman models entirely disappeared. Closer attention to writing practice, beyond the mere propagations and idealizations of the reception of Greece and Greece-alone, would be important to develop an innovative perspective on German Graecophilia.

What happened in the interdependence of historiography and the literary field over the course of the nineteenth century is a different question. Here, Andurand raises important points regarding the agency the history of scholarship acquired, through disciplinary professionalization and innovative revisionism. It is certainly highly important to see Nietzsche’s reimagination of the entire complex of tragedy in this light. Yet it is also regrettable that, in line with the exclusive concentration of Andurand’s study on the German imagination of Greece, the Orientalist side of Nietzsche’s work (Dionysos and Zarathustra) is eclipsed. In general, the fact that Graecophilia was from its beginnings entangled with the various conjunctures, and the perceived threats, of various Orientalist imaginations – a fact the work of Suzanne Marchand has amply brought to light – receives too little attention in Andurand’s study. The question of the context of national-historical imaginations in which Graecophilia had to hold its own is only cursorily broached (e.g. for the Nazi period in ch. 7, where the “Aryan” context makes the problem inevitable). The environment of “elective affinities” to distant pasts was continuously and fiercely competitive. Not only did Latin, Egyptian, Indian, and later on even Babylonian and Chinese “antiquity” stake claims to cultural normativity. Also the Middle Ages – the chivalric as well as the “Nordic” – and of course the “Germanic” world of late antiquity provided powerful imaginaries that vied for public favor with philhellenism and, as e.g. the successes of Richard Wagner illustrate, often had similar or even greater impact than the increasingly dry-as-dust philologists of Ancient Greek. Indeed, one would appear to give too much credit to classicist phantasies of exclusivity if one did not recognize the plurality and indeed the wild mixing of historicist imaginaries, fads and fashions that constituted, much rather than philhellenism alone, the key to nineteenth-century German cultural taste (or “taste,” if one wishes to be aesthetically prudish).

To boot, there was the Bible. The fact that Greek was the language of the New Testament was, at least in the early nineteenth century, a key factor for making Greek studies central to an interdisciplinary project of the theorization of the humanities in which (Protestant) theologians like Schleiermacher (not mentioned) crucially participated. The competition of Greek studies with Orientalism also drew on the competition of Old and New Testament studies within faculties of theology, a feature that would have deserved more attention in the study. As it is, in Andurand’s account, the secularity of the cultural imaginary of nineteenth-century Germany is a given, not a problem. No wonder that the matter of “belief,” as well as its surrogates, does not quite come to the fore, then.

It is also true that the overall terrain occasions a specific type of explanatory circularity. Given that German Graecophilia was indubitably the national German variant of a broader European classicism, a variant that precisely served for the very construction of a national German imagination, methodologically, all studies in this field face the problem of presupposing a nation that supposedly is only being constructed by the phenomenon under scrutiny. Andurand’s work makes no exception to this rule. In this field, which tends to be treated predominantly as a matter of intellectual history, the socio-cultural specificity of philhellenism remains obscured. Yet, the small Protestant educational elite – that pulled along the education-oriented minority within the Jewish minority, but left out much of the Catholic world of learning, not to mention other social, cultural and ethnic milieus – that commanded parts of the literary field and enjoyed great political clout was nonetheless hardly representative of all of Germany. The fierce resistance with which even mild expansions of access to higher education – such as the 1890s rise of the “Realgymnasium” and the resulting demotion of the Greek curriculum Andurand discusses in ch. 6 – were met indicates that philhellenism was not only an ideology of nation-building, but also the “cultural code” of an elite that struggled to preserve its privileged access to certain forms of cultural capital.

To conclude on a more positive note, the book certainly succeeds in nuanced and valuable discussions of its central subject matters. If, as Michel Espagne remarks in a short preface, the history of the study of classical antiquity in nineteenth-century Germany is still largely terra incognita for a French academic public, there can be no doubt that Andurand’s study makes a major contribution toward filling, if not all, then at least a very considerable number of the resulting blank spots on the map.