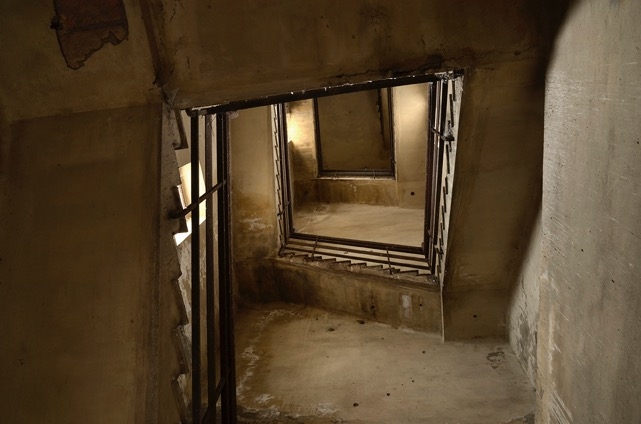 Inside the Casa del fascio

The Emilia Romagna region is a veritable mine of historical information and memories for Fascist, anti-Fascist and Nazi-Fascist Italy. It is the birthplace of Fascism, not because is it is the place where Benito Mussolini, the Duce of Italian Fascism, was born but because it is where the first Fasci di combattimento – through the use of violence and the connivance of landowners – won their fight against the socialists, forever changing the destiny of Fascism and Italian history. Not least for this reason, in the aftermath of the fall of the Fascist regime, the conflict between Fascists and anti-Fascists here was a particularly bloody one: the settling of scores, which had been put off for twenty years and had been further exacerbated by the acrimony of the world conflict, continued in the post-war period. For all of the above reasons, but also on account of the vigour of post-war Communism and of the rich culture and resources in this region, sites of Fascist – and anti-Fascist – memory are widespread here and in some cases have become genuine landmarks. In addition to the Resistance institutes, we find sites of great symbolic significance, such as the Museum of the Republic of Montefiorino, the Historic Regional Park of Monte Sole, Casa Cervi, Villa Emma in Nonantola, the Museum of Deportation, and – from a very different historical perspective – Casa Oriani.

In this region, a political and cultural strategy of reflection on history and memory has emerged over the last decades, leading to the development of various historical itineraries. Two places stand out in particular, on account of their very different histories and post-war destiny. The first is the internment and transit camp of Fossoli, through which thousands of political and racial prisoners passed during the Second World War (including Primo Levi), on their way to German concentration camps. The site also witnessed various massacres of political prisoners. A long forgotten place, it was opened up to the public again in 1984 and now houses a foundation which nonetheless struggles to restore the site to the prominence it certainly possessed in the history of Italy, for reasons I cannot go into here (significant economic investments would be required to prevent it from falling into disrepair). The other site is Predappio, a largely insignificant town in the history of the Fascist regime, were it not the birthplace and now burial place of Benito Mussolini. It therefore boasts architectural structures on an unexpected scale, as an enduring legacy of that birth and regime. In the aftermath of the war, especially after Mussolini's body was brought to the town, Predappio became a neo-Fascist pilgrimage site. In a way, both these places have been forgotten by most Italians (considerations about the two sites were put forward by Simon Levis Sullam during the polemic about the establishment of a museum at Predappio1).

In this respect, it is quite puzzling that a region such as Emilia Romagna has not yet considered the possibility of including these two places in a regional map of the history of Fascism, anti-Fascism and the Resistance, in such a way as to contribute to the development of an open-air museum – of national interest – devoted to this aspect of Italian history. In recent years, the Mayor of Predappio has instead suggested establishing a Museum of Fascism – one of national or even international interest, at least according to his intentions – in order to limit neo-Fascist pilgrimages and draw a different public from the one which visits the town three times a year (on the days of Mussolini's birth and death, and on the anniversary of the March on Rome). The news of possible ministerial funding has spawned a debate, which has chiefly involved historians and has received some echo in the press – but less than what might have been the case only fifteen years ago. The debate has led to some considerations on how to engage with the memory of Fascism and has drawn attention to the lack of a museum on the history of Fascism (or more generally 20th century history) in Italy. A few notable contributions notwithstanding, the reflection on how to grapple with the memory of Fascism has remained impressionistic and regrettably devoid of any real insights or ideas. Most worryingly this has particularly been the case among those who believe that Predappio is a good place in which to set up a Museum of Fascism. Even the preparatory guidelines for the establishment of such a museum2 are remarkably vague and weak in their attempt to explicate and make accessible through a written text – which could hardly have taken the form of an academic article – the links and relations between history and memory, with regard to which important points have been made by historians.

Personally, I find it is significant that the Predappio question has in a way inverted the order of the issues to be addressed, by forcing us to discuss the location of the museum before even discussing the reasons for establishing such a museum, the form it might take, the opportuneness of the whole operation and the difficulties it may pose, regardless of the site chosen. Clearly, this is the responsibility not of the Mayor of Predappio – who has only offered a chance for reflection, if we like – but rather of those historians who voiced their support of the project, before even opening up a debate on the matter. As broad as possible a debate ought to have taken place among historians and heritage workers, in order to then identify those with enough expertise and competence to be called upon to carry out this enterprise.

As things have gone quite differently, this debate cannot be launched without discussing the location. I believe that Predappio is not the right place for a national Museum of Fascism – and this, for a number of reasons that other historians have already highlighted. From a civil point of view, one of the reasons is that a public reflection on Fascism, of the sort a national (or even European) Museum of Fascism would elicit among Italians, ought to emerge from a central and significant location for the country, and not as a response to the neo-Fascists who rally at Predappio. The museum, therefore, should only be established in a major city that played a significant role in the development of Fascism; and the only possible candidates, in my view, are Rome and Milan. Furthermore, from a historical and historiographical point of view it is evident that the location chosen would reinforce the identification of Fascism with Mussolini3: an identification which instead ought to be avoided, given that – as historians have clearly shown – it has been one of the key means of collective self-absolution for Italians in relation to Fascism. Finally, from a political point of view, a museum of this sort is bound to have the younger generations as its target, and the sacred quality acquired by Predappio, through the presence of Mussolini's tomb and the nostalgic pilgrimages made to it4, would constitute – and, indeed, already constitutes – a cultural obstacle for any effort to foster awareness on these topics through a museum, as many earnest teachers familiar with these historical itineraries have noted. No compelling counter-arguments have been advanced so far, if not on a purely voluntaristic or pragmatic level – and this is hardly enough to refute the significant doubts that have been raised.

All that said, the question of how we should approach the issue of the public memory of Fascism and of the possible establishment of a Museum of Fascism (or of Fascism and anti-Fascism, or of 20th century Italy?) remains open.

It seems to me that two initiatives are urgently called for on this level. On the one hand, as Igiaba Scego has suggested in “Internazionale”5, it would be worth mapping Fascist sites of memory, such as the many monuments from the Fascist period in Italian cities, which have become invisible to people given the frequency with which they pass by them, but whose history we need to fully come to terms with. First of all, this history must be reconstructed; but it must also be made known to the people who see the monuments on a daily basis, as well as to those who come across them as tourists. This map of Fascist sites should encompass every local community, but also Italy as a whole: the country must be capable of facing the idea of a national map illustrating what Fascist monuments have been preserved – and how – without baulking. In addition to a map of Fascist and anti-Fascist monuments and sites (which would be bound to include Predappio), we need to engage in a careful reflection on place names and on the construction of meaning in relation to Italian history through the memories of a key moment, such as the Fascist period. I believe that local communities in Italy have come to terms with Fascist monuments and place names – or failed to do so – in very different ways and that a lot of work is to be done in order to simply analyse these phenomena. I would like the Istituto nazionale per la storia del movimento di liberazione in Italia (INSMLI) to take the lead in this work, possibly together with the Associazione nazionale partigiani d’Italia (ANPI). These two institutions have worked side by side to reconstruct the Fascist, as well as Nazi, massacres that took place in Italy between 1943 and 1945. Coming to terms with Fascism starting from its monuments and the marks it has left on Italian public memory would therefore be an important step in the country's effort to distance itself from a past which it has never fully reconciled itself to. This, however, would only be a first step: for Fascism has a tragic and violent history even outside Italy, a history we must be capable of facing and claiming responsibility for; and recording the colonial memories scattered throughout the country is not enough in itself. A museum on the history of Fascism, therefore, should no doubt take the colonial experience into account and devote adequate space to it, as well as to Italy's occupation of foreign territories during the Second World War.

In any case, I believe that a map of these sites, monuments and landmarks is a project to be pursued in parallel to the establishment of a national Museum of Fascism, a project that would nourish it over time, while lending it relevance and meaning. Just as Germany is coming to terms with the history of Nazism, in different ways and through different kinds of museums, even at a considerable public expense, the Italian state and government authorities ought to come to terms with the history and memory of Fascism in this country. On these bases, a museum could be set up in different ways and with different emphases. The creation of a museum of this sort is nonetheless bound to follow upon an open and inclusive public exchange, one which also takes account of the ongoing debate on the representation of Fascism and on the problems posed by drawing upon sources used for Fascist propaganda in order to explain the history of Fascism (and, again, no trace of this debate is to be found in the guidelines for the project of the Predappio museum). But it is also necessary to take into account the important role played by anti-Fascism in Italy, and hence determine whether it is more appropriate to speak in terms of the history of Italy, of the history of Fascism, or of the history of Fascism and anti-Fascism. In this respect, the starting point of the project ought to be the effort to clarify – right from the start and in an explicit way – what idea of Fascism it seeks to convey: what interpretative hypothesis Italy as a whole wishes to adopt and put forward in relation to this aspect of its past which so dramatically shaped the course of Europe in the inter-war period. 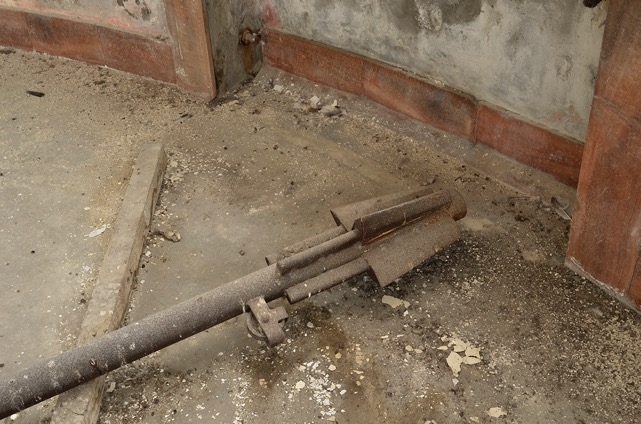 Inside the Casa del fascio